Everyone has their best friend for this and that. There are certain friends that you’d happily watch a shitty football game with in pajamas. There are certain friends that you’d never let watch you take down an entire bowl of queso. I guess once even in a rare occasion, though, friends come along that allow you to truly “come as you are” in every situation imaginable, whether they are cutting, dyeing, putting gum in, or holding your hair (while you puke). But, I would guess it’s truly the MOST rare when the person that you are closest to is the very same person that was there when you entered this rowdy world, covered in slime. And Im not talking about your mom’s obstetrician. Meet my sister, Natalie! She is the one only and most super duper friend in the world. And she’s done more for me than just about anyone else, as well! Check out her thoughts below as I probe her mind with something other than a stick from the yard, as I would have to her face at age 7. She has some absolutely amazing insight. She loves Janet Jackson maybe more than I do. And be sure to watch the video at the end of the interview. Whoa, right? 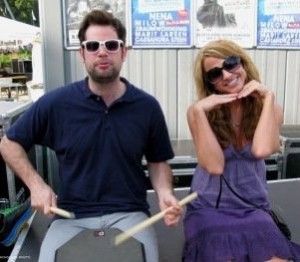 1) Do you have the ability to create on a consistent basis, or do you find that most ideas come in those rare ‘flashes of genius’?I constantly create in my mind.

It’s the only thing that keeps me going…it’s an escape from reality, the mundane marching of ants that we as Americans, or maybe just humans have decided is the way to live. Flashes of creativity are constantly in my mind, the idea of playing the situation in a different way, the creation of a different way of seeing something, the creation of a thought that doesn’t exist, turning music into a movie, the drama into humor, the idea into a choreographed dance. I find that I create most easily while running or while I’m about to fall asleep. These are the times that I’m in least judgment of myself and my thoughts. I learned at a young age from some pretty smart people in what can be thought of as a not so open environment (in other words Crowley, TX) that in order to truly create flashes of genius there can be no judgment…not only of yourself, but others. So when I run, my conscious mind concentrates on the task and allows my creative mind to just flow…it’s the same when I’m tired. It’s like my conscious mind is too worn to judge my thoughts. Often times I wake up the next morning only to then judge what I thought was so brilliant the night before.

2) Further, how do you maintain motivation to stay hungry and create? What notion drives you to see an idea through?
I continually create in my mind because I’m never satisfied with what is. I’ve yet to really feel “it” and to really experience what it is that I feel deep down is what I was put here to do. I don’t do anything half way. You put a wall in front of me I will create a way to climb it, dig under it, go around it, smash through it (to a fault). Maybe when I become satisfied with life, my mind will go black?

3) What other creative avenue or area would you most want to work in that’s not your main focus? (ie: You may be an accomplished xylophone player, but deep down you really just want to sculpt busts)
When I hear music, I see a movie in my head instantly…it’s how I translate what the music makes me feel. Therefore, I’d like to translate that feeling through both picture and movement…..option A (and most obvious): a music video director. Option B (more challenging and passionate): a ballet choreographer. I find that ballet is the most passionate dance…the most dramatic and descriptive of feelings.

ME BEING A MUSICIAN, I WANT TO KNOW EVERYONE’S FAVORITES TOO

Anything Michael Jackson makes me want to dance..specifically “Off the Wall” and “Shake Your Body” (technically The Jacksons) and also “September” by Earth, Wind and Fire. Music that makes me cry is usually because it touches me specifically at the moment…however, “Just Breathe” by Pearl Jam, “Something” by The Beatles and for some reason “Adia” by Sarah McLachlan makes me emotional.

2) What’s been the album you’ve most consistently listened to in your adult life?
It’s a toss up between Janet Jackson’s “Rhythm Nation” and “Control”…that’s why Janet Jackson’s “Number Ones” is the perfect album for me.

3) Does Steely Dan creep you out?
I just got a stomach ache and had to walk away from the computer thinking about Steely Dan….something about that shit ain’t right.

1) What’s the one thing no teacher would’ve ever taught you in school, but you wish they would’ve?
There ain’t nothing wrong with some people that a good ass kicking wouldn’t take care of.

2) The world is a super scary place. Are you optimistic about the future of it?
I’m optimistic that it will only get worse.

3) What happens after we die?
You go to heaven or hell….but based on seeing some family members die…someone comes to get you and take you there.

LET’S GET A LITTLE WEIRDER.

1) Tell me something.
The time I peed in front of Mr Peppermint was the defining moment in my life…I was 3.